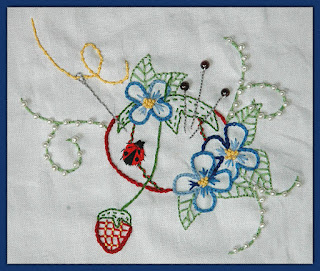 Here's a photo of my finished version of this month's stitch-a-long. The pin heads are large beads but French knots could be used. Same with the pearls. Have fun and use the stitches you like!

Sorry if you didn't get last month's thread pattern. Look for another next month and remember the patterns are only up for 1 month. This one will be removed on April 24.


This is the third in a series of embroidery patterns featuring sewing items. Eventually they willl be sold at my Etsy store.

Disclaimer:
I drew this design by hand then used a software program to edit it.
Please consider the drawing copyrighted. You have my permission to print copies of the drawing in any size for your own use but not to share or sell. If you want to share the pattern please link to the blog pages.
The embroidery design is my own. I have not knowingly copied anyone else's work.

BTW, all of last years free patterns will be removed at the end of the month!
Posted by BJ at 1:33:00 PM 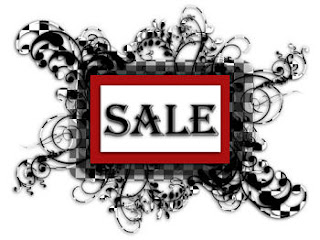 Happy Spring! I'm celebrating with a 25% off sale on my PDF patterns at Etsy!

With so many of us following the request to stay at home I thought I'd put my patterns on sale at Etsy at least for the next month, though it may run longer. Etsy only allows 1 month at a time for a sale. I'll renew it for another month if we're all still pretty much housebound.

As some of you may know from reading my blog I've had panic attacks my entire life, yes even when I was a toddler, it's one of my early memories. There were many years when they got so bad I was housebound and the thought of leaving set off fear. Now that I consider myself a medium functioning agoraphobic the thought of not being able to get out is causing me mild panic. I think it's coming from worrying that I may go back to full blown agoraphobia and not be able to go out without having panic. So to keep the fear at bay I'm going out but only to drive from one of our houses to the other. We have 2 places we live at and the drive is about 20 minutes apart. This is working so far. I hope you all are doing well. Let's follow the rules and just maybe the virus won't spread as fast.

BTW, the newest free embroidery pattern will be up next week and all of last years free ones will come down by April 1 or 2.
Posted by BJ at 4:03:00 PM 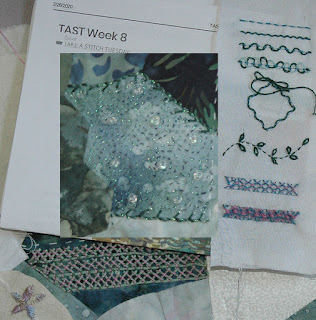 Week 8! I put the running stitch pic over the twisted lattice band pic. Next to the lattice is a starfish I embroiderd. I'll be cutting it out and sewing it over the lattice. The running stitches are meant to be the circles you see on water when things drop into it. In this case it's the beads representing drops of water. My other samples are on the right of the picture.
Posted by BJ at 2:04:00 PM

I finally closed my store at Patternmart. Today I updated all the pages here on the blog and at my website, http://creativestitchery.tripod.com/index.html . I'm embarrassed to say I found SOOOOOOOO many goofs there. Not just spelling, which is bad enough, but tons of link problems with all the old free patterns.Went over every page and think I found all the problems, at least I hope I did. :)

You can still buy my patterns at Etsy and some are at Dollmakers Journey. As always I can list them at ebay if that's where you prefer to shop.

I'm off to renew my domain name before it expires. I seem to be VERY behind on everything. It expires tomorrow. At least the taxes are done and got the refund.

Update on next pincushion pattern. The directions are almost done. If it wasn't for all this updating (Which it turned out needed to be done badly) it would be ready for sale.

I know I'm spending WAY too much time on my TAST results. It's keeping me from all the sewing I should be doing. At least I stopped playing games. I wasn't getting anything done when I was addicted to them.
Posted by BJ at 5:03:00 PM

TAST week 7, at least one of them

Here's what I did for week 7. On the quilt top I did the week's lazy daisy stitch. The sample shows the other stitch given, the barred chain stitch. I used it on the blue/green quilt but haven't taken the pic yet because I'm doing week 8 on it. I keep all the excess quilt rolled and tucked with safty pins so it's out of the road as I embroider.

This is what I'm doing instead of what I should be doing, DESIGNING new patterns.  I am finally finishing the directions for a rabbit pincushion I actually made last fall. It would have been done but I got side tracked by another pattern idea. It's done but needs the directions written. Since it's a winter pattern there's no hurry.

BTW, I"m leaving Patternmart. I just don't sell enough there to cover the monthly rent. I'll be removing links by the weekend. You can still get my pattern at etsy. I should list them at ebay but they make selling PDFs harder. Dollmakers Journey carries most of my patterns as printed and PDFs.

I've had customers ask if I'm going to design some new tatting patterns. If you've been to my etsy store you know I don't even sell much for tatting any more. I've just lost interest. Embroidery has captured my mind right now so I don't know when or if I'll ever design for tatting again. I do have some simple patterns for jewelry I had planned on selling for a few dollars. Maybe I'll hunt for them and get them up sometime this year.
Posted by BJ at 1:08:00 PM

Still behind but here's week 6 for TAST 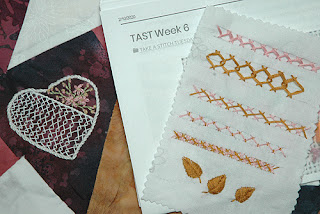 I hate that I have SOOOOOOOO much trouble making up my mind when it comes to deciding what to embroidery using the week's stitches. This week was herringbone and raised closed herringbone (which makes the padded leaf shape). For this quilt I did part of the heart with herringbone stitch. Below is the result of the raised close herringbone. I'm not done with that embroidery. I want to add more flowers and leaves to it. 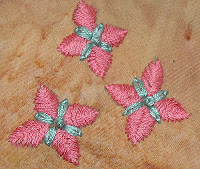 This is my other crazy quilt I'm adding embroidery to. I used the herringbone stitch for the net over the fish and for some of the plant leaves. 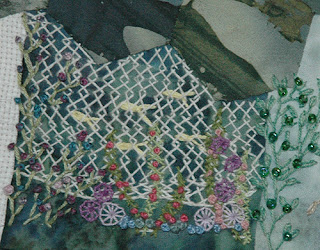 This pic shows the leaves better. 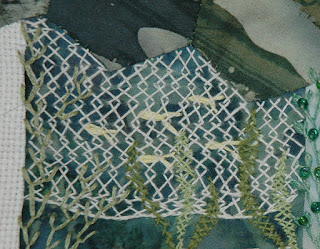 I may end up combining a few weeks just to catch up. I need to do weeks 7 & 8. Tomorrow will be week 9, though here on the east coast of the US it shows up on Monday afternoon thanks to the time difference.

I may never have added embroidery to these 2 quilt tops if it wasn't for TAST. It may take a few years to fill in all the spaces and then do the seams but at least it's better than leaving them in the bottom of my large embroidery basket.
Posted by BJ at 1:57:00 PM 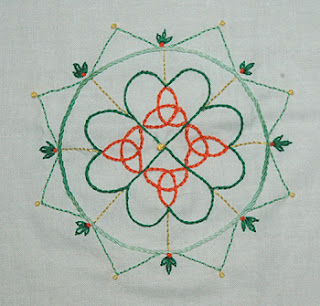 I wanted to do something a bit Irish for the month so here's a simple mandala with an Irish twist.

Reminder - This is the last of the first stitch-a-long I started last April. All of these patterns will no longer be free come April 1, 2020.