I know some of you can't find the mini clothespins I use for my clothespin doll patterns so guess what? I made a PDF of directions showing how to make the doll body using wood dowel rods!!!!

The PDF is included as a second download at Etsy. I'll be sending out the PDF to those who have bought the new versions of my patterns this spring and summer at Etsy. 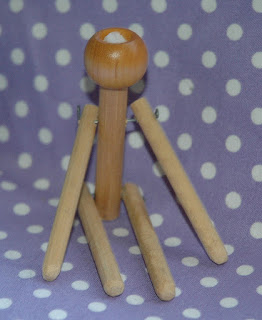 Weird but new blogger works, let me tell you about it

Ok, this is just too weird. I can't get the new blogger to fully load when using chrome but it works when I use firefox. Still not a fan of it but at least now I know I'll have to switch over to post. Which is a pain since I'm a chrome user even though I can't update it anymore because of my old winxp. 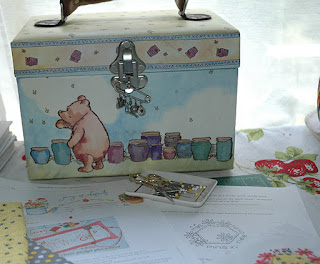 In case you were wondering, this is the case I use for my embroidery. I found it at the local humane society's resale shop last year. I picked it up and put it back a few times because I couldn't decide on it or a picnic basket. I'm SOOOO glad I got this but I do wish I had got the basket, too :) .The handle is leather and the box is really hard cardboard. The metal closure keeps it from opening by accident. Don't you hate when whatever you have all your supplies in opens and everything falls out? I have a pin with charms I bought long ago in the latch. It has sewing charms hanging from it. 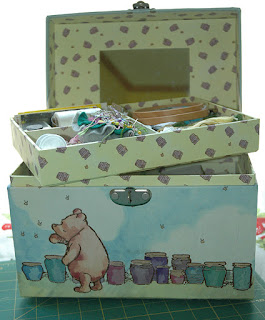 The inside is papered with honey jars (perfect for Pooh) with a mirror and removable tray. The tray holds my basic embroidery supplies and the threads I'm using for the project I'm working on. I fill the bottom half with more threads, fabric, and more projects to be worked on. 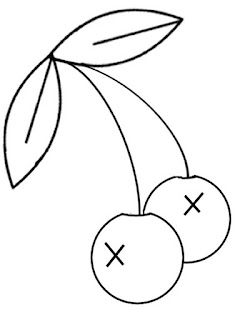 Here's the free cherry pattern. I used it for a tablet cover I made. Look at past posts for info on the cover and a link to the free directions. 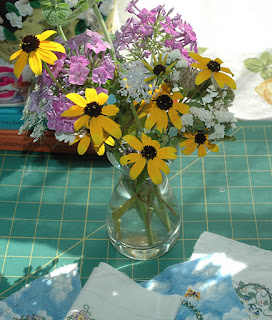 Picked these flowers in the yard. I think they're prettier than the one Jack bought me at the farm market a few weekends ago. At the bottom of the picture you can get a peek at some new embroidery patterns I'm working on. There are 4 so far with 4, maybe 6 to do.

I'm really enjoying embroidery again and love to share my patterns. I want to appologize to the tatters who followed my work. I seldom tat anymore. Oh, I have lots more designs sketched out and some done but I seem to have lost the fire I once had for tatting. As always I have WAY TOO MANY projects going at one time. I did get out all the jewery patterns I made up but soon realized all the time it would take to put together the pattern. I guess if I did my pattern much more simple I could get them out quicker but I feel the need for more detailed instructions so even beginners can follow them. So until I can figire out a way to get more time to myself for designing they will all sit in a box.
Posted by BJ at 3:10:00 PM 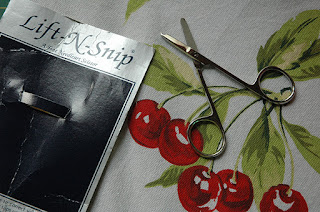 I was searching thru some boxes of things I had planned on selling on ebay last year but never got around to it. Now I'm glad I didn't because here are the scissors I've been looking for. I used to sell cross stitch supplies when I first started my mail order business and these were left from then. I'm thinking they'll be great for clipping off threads when I embroider something and then don't like it. They were sold for cross stitch so they should work for my embroidery, too. 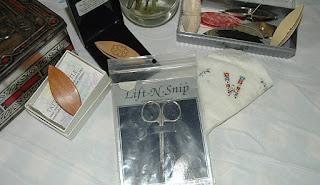 The box also had some old tatting shuttles. The first tatting shuttle on the left was made by Georga Seitz. She runs free tatting classes online. The second shuttle was made in England in 2000 for The Ring of Tatters group. The rest are some vintage ones I've bought over the years. I lost interest in collecting shuttles so I was going to sell these. I also lost interest in tatting so there's no reason to hang on to them. 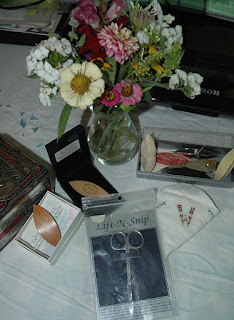 My DH bought me the flowers at the local farm market on Sat. I thought they'd be nice in the picture. The hankie with the W or M depending on which way you look at it was in the tin box but I wouldn't sell it. I have a LARGE collection of hankies that I sometimes use but mostly keep with some vintage embroidered doilies. Some day I'll sell them off but for now I enjoy looking thru them. 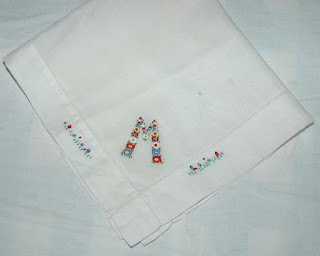 The flowers are so tiny I thought they must be done by machine but after looking at the back I'm not so sure. 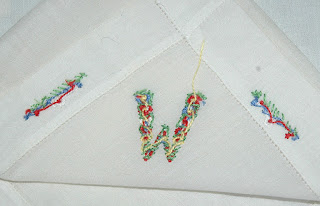 Today's been super busy with housework and cooking. Luckily it's raining so no gardening , yay! This is a pic of one of the blackberry chocolate cupcakes I made. The recipe came from a free PDF booklet from Meghan Ciana Doidge. She writes fantasy books. Click on the link to extras and freebies to get a copy of the cookbook. I made a few changes since I can't have dairy. The blackberries came from the house. I have a large patch and get at least 3-4 gallon bags of berries a season. I've probably written about them if not here then at facebook. BTW, I'm not spending much time there lately. I just can't find the time. I'm hoping by fall when gardening is done I'll have time again. I miss TAST and Johanna's posts. It's become I can post here or I can go to Facebook, I don't have time for both in my schedule right now. 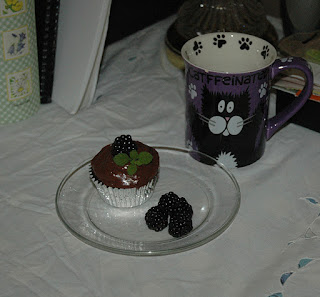 A new stitch-a-long freebie for the month 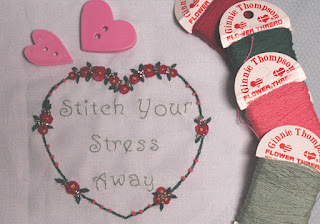 Here's number 4 in my keep calm series, get it while you can :) It's free for the month and will be removed when I put up the next one. Last month's stitchery is still up and will stay up for free.

I traced this design using a Micron pen. When it came time to do the leaves, I just did dots where the top and bottom would be. They are not all drawn on the pattern so you can be free to add as many or few as you like. I did a few at the top so you could see the sizes I made them. Leave them off if you don't like them.

Here's an explanation of the stitches I did. Since I don't want to type Ginnie Thompson over and over I'll be using GT for it. The heart is done in GT 463 thread using a chain stitch. The dots on the heart are 3 wrap French knots using 2 strands GT275. The flowers are buttonhole stitches made with GT 290. The centers are 2 strands DMC 2748 4 wrap French knots. The leaves are 2 strands GT 463 to make the lazy daisy stitches. The text is GT 457, 1 strand doing back stitch. I added sheer pink and green seed beads around the flowers.

Sorry if you didn't get the first 2 patterns. Look for another next month and remember the patterns are only up for 1 month. This one will be up for free until Sept. 1 and then it will be replaced with a new one.Click on the drawing then right click to save it to your hard drive. 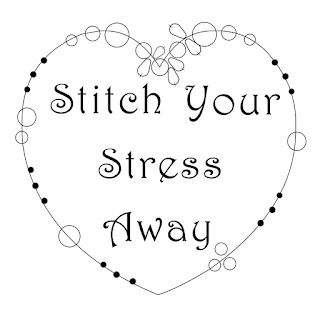 Disclaimer:
I drew this design by hand then used a software program to edit it.
Please consider the drawing copyrighted. You have my permission to print copies of the drawing in any size for your own use but not to share or sell. If you want to share the pattern please link to the blog pages.
The embroidery design is my own. I have not knowingly copied anyone else's work.
Posted by BJ at 4:13:00 PM