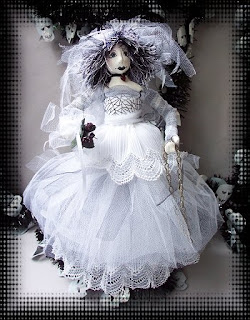 Here's a pic of my latest Halloween doll, a ghost bride. I really like her and hope you will, too. Look for more on here at my eBay store where she's for sale.
I know I'm a few days early but I may not get back here on Wed. A few things I posted for Halloween on eBay have sold. I also joined some eBay groups in hope that adding their names would help get me more exposure. I'm alos getting out of some of the yahoo groups I belong to. There's just not enough time for them all. First to go was the Paint Shop Pro group. Next will be the altered art groups. Here's a list of the 5 ebay groups I now belong to:
1. HA31, Halloween Artists Gathering - Thay also have a web site. I'll link to it when I get on it.
2. SEHA, Society of Ecletic Halloween Artists
3. Dare to Design, I thought this was a group for fellow pattern designs but it seems to be a group a person who makes bead spiders started. Not much activity other than her posts.
4. ADSG, Art Doll Scuplture - Not sure I fit in here. Most make fairy and fatasy dolls from clay.
5. EFFA, Fareyzine - Not sure I fit in here either.
Can't believe there's not a Christmas doll group. In fact there's not many Christmas groups. I thought about staring one but don't know if I want the hassle of moderating even if I limit the membership. There's a dragon group and a thread bear group. I should join these, too.
Here's another of my new dolls. She's a vampire queen. Wish I could have gotten a better picture of her. All the black makes her face photograph badly, you can't see her nose. She's on eBay, too. 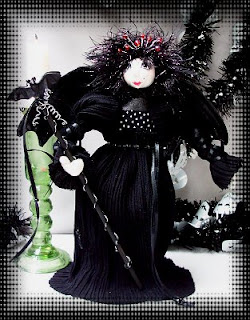 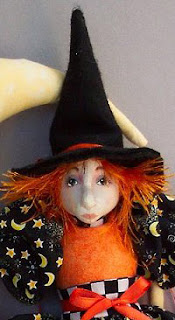