Just thought I better post about Crafty Ave. closing. I never did get much up there. It was run by the same people as Pattermart so I never really gave it any of my time.

I'm working on some new Halloween and Christmas dolls. Have pics I need to post of some I've finished but I've spent the afternoon at Pinterest and now I find I don't have time to do it. I spend WAY TOOO much time there! :) I am so addicted to that place, I even started a board on nails. I love that users can now have secret boards. Great way to fill a board before making it public.

I started a board there for my doll patterns at etsy now I have to add ones from Patternmart. I'm also doing a board with pics of dolls I've made. Some will be pinned from here and other from photobucket. Easier and much more fun than doing a web site photo album. I put a link to my boards in My Links to the right.
Posted by BJ at 4:44:00 PM 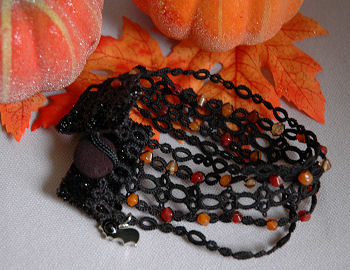 This is a Tatted bracelet I made with orange beads. Notice the small bat charm! I really like making them and now I'm working on some in colors other than black. 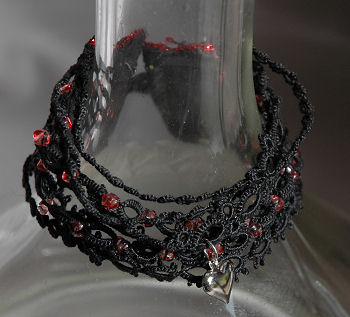 This one is similar but has red beads and a heart charm. I'm selling some of them at my etsy store so look for the etsy link on the right side of this page. 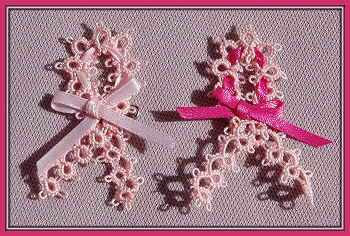 These are some ribbon I tatted for breast cancer awareness month. I also have some of these at esty.

After going to another family funeral last week I'm so burnt out I haven't been sewing or working on my next tatting pattern which was going to be winter. Having my computer in the shop for another virus removal didn't help either but now that I have a laptop, too, maybe I can get back to working on things. This sure hasn't been my most productive year :(
Posted by BJ at 3:37:00 PM

I know it's been ages since I last posted. It's been a pretty bad year so I just can't seem to keep any momentum going with much of anything.

After losing our beloved Lab Murphy in May it took all summer before I felt like doing much and then in Sept. my sweet niece, Becky, who was only 23 died. I had to fight off some depression after that

I did get Halloween dolls up at ebay but 2 weeks before Halloween my husband picked up some viruses so the computer went back to the shop. This is the second time this year. We use Mcafee thru our isp and do updates usually twice a day but guess it doesn't always help. That meant I had to shut down my etsy store and stop selling at ebay. I did check mail at the local library but I couldn't get there every day so I had to stop selling. I just got my store open again at etsy and next I'll start listing dolls at ebay. At least we finally got a second computer that can hook up to the internet. When my husband picked up the one in for service he bought a used laptop. Now maybe I won't have to shut down my stores.

Monday was at another family funeral. This time it was a cousin and she too was too young. She had been sick for so long it was expected but still it was awful.

Last month I had a distant Aunt pass so this year pretty much sucks for me and mine.

I'll try to get some photos up of some bracelets I've been making soon.
Posted by BJ at 7:14:00 PM