Listing decorated tatting shuttles at Etsy and other news- 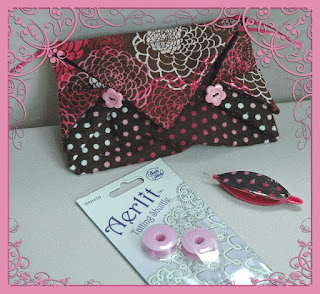 Here's a pic of the first of the decorated shuttles and bags I'll be listing at my Etsy store. Six will be Aerlit shuttles and 6 will be Moonlit shuttles. I'll get another 1or2 up tomorrow and the rest next week. Today is my wedding anniversary and my husband's birthday was yesterday so we're celebrating on the weekend. At least that's the plan. I think we'll be cutting grass.😏

I had a BAD surprise today when I pulled out the box that holds the pics I use for pattern covers. Most of them were stuck together!!!!! Guess when I watered the plants on the shelf above them (when????) I must have spilled water on the box. Every pic of the new mermaid is 'glued' together. That's about 30 pictures 😢 What a huge waste. I tried heat and water but nothing is working so now I have to order new ones. I think I'll take some new pictures for some of the patterns. I never was happy with the dragonfly riders pic.

I have the new legs done for the bird riders and yes they do stand! Now for a new cover pic and wouldn't you know it, the old ones where hardly damaged.

Updating patterns and other things

It seems like every time I post I'm going to get some things done something happens. This time I fell down some stairs outside and sprained my ankle really bad. Our insurance is crap so I didn't go to the hospital. I should have but since I've had a fracture before and know how it feels, I knew this wasn't one. My big problem was that I forgot I still had a brace. That would have kept me from hurting it over and over. It seemed every time I went outside I managed to step wrong and twinge it all over again. It's been over a month and it still hurts a bit but at least I feel like getting back to work.

Today I finally put the finishing varnish on the decoupaged tatting shuttles I started last Nov. So much has happened since then. This has been a really awful year for my family. Yesterday my brother called from Vermont where he and my sister-in-law were on their way to visit some friends for a nice vacation. Turns out they were caught in a terrible rain storm and were rear-ended by a large dump truck! They weren't injured but the trunk is now in the backseat.

I've also decided to work on going over all my patterns looking for mistakes, add more drawings and pics if needed, and change the PDFs. I decided to make the pictures and drawings larger in the PDFs. To keep the cost of printing the patterns down, I've always made them small. Once I get them done I'm going to try to send out emails to those who have purchased them offering to send the new version for FREE! I had 8 done and then I decided to make more changes so now I only have 2 done.

I'm making BIG changes to the crocheted chatelaine pattern. I"m making a new sample using size 3 Lizbeth threads. I also found some of the directions were not written clearly so I'm fixing that.

I also plan of fixing the legs of the birds in the bird riders patterns. The birds have been torn apart now I just need to decide how I want the.

I have a new pincushion pattern half done. The elephants are done, I just have to do the containers. I even have the directions done except for the containers.

OK, everyone send good thoughts my way so nothing slows me down again. ;)
Posted by BJ at 7:55:00 PM