I'm late joining in on cleaning out closets

Last spring when we were all home and people were cleaning out stuff. So much that the garbage company send out a letter asking that customers to contact them if they were going to put out more than the max of 3 large bags. Well, I didn't join in, I tidied up closets and shelves but didn't get rid of much. Did you know here in western PA the term is redding up? Pittsburgh-ese is often weird.

So with the DH away (he's due back tonight) I've decided to get some cleaning out done. First was my clothes closet that had clothing in sizes 6 - Plus sizes. The plus ones were my Mom's sweaters that I love to wear even though I have to roll up the sleeves like 3 times and I could fit another person in. When I wear them it's like a hug from my Mom. The smaller sizes were from when I was that small. I'm a 10 - 12 now and have been for a while so it was time for all the 6 and 8 to go.

I found I had 10, yes 10! white shirts and not one of them fit. I belong to a facebook group on upcycling clothing so I posted a pic and asked for suggestions. I'll probably just cut them apart and use the good cotton for more embroidery. I can never have enough :) 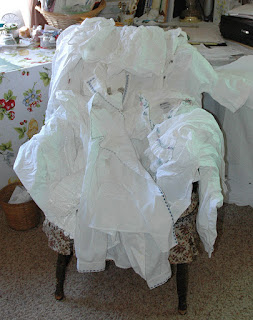 Ok, this is SO stupid but I have to confess it. In various boxes and suitcase where I stored all these clothes I found I had 4 almost identical  v-neck black sweaters. Worse, I don't remember really wearing them much. Well, they're in one of the bags to go to the local humane society resale shop when I can get an appointment to drop them off. So far there are 5 bags but the DH still needs to go through his stuff. I know he has t-shirts that he no longer likes and jeans that no longer fit. 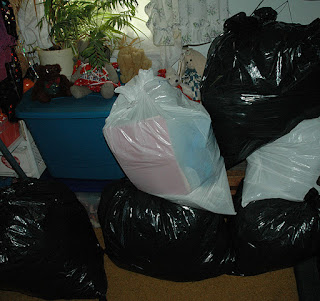 The 6th bag in the photo has craft stuff I'm getting rid of.This is not easy for me to do. I'm a pack rat when it comes to anything I just might use for crafting. There's more to go. I have to get rid of some of my magazines and books. I'm going to wait until covid gets under control because I don't want to deal with shipping stuff. 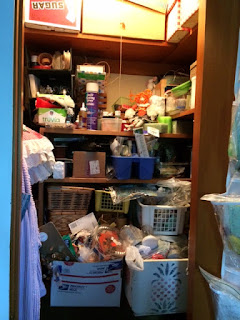 Here's what I cleaned out. This is a big closet but I had it stuffed to the point that I didn't want to open it to look for supplies. Once emptied here's just some of what I found. Oh, the shelves in the background of the first photo were also tidied up. I sorted all my lace, trim, and ribbon and put them in jars. It's so nice to see what I have instead of sorting thru bins. 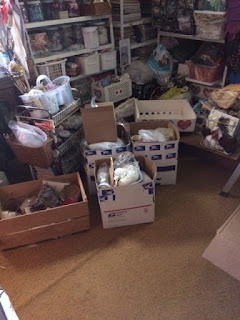 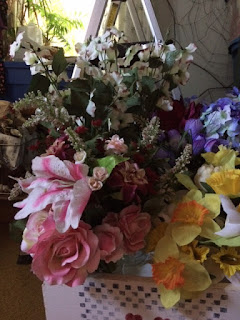 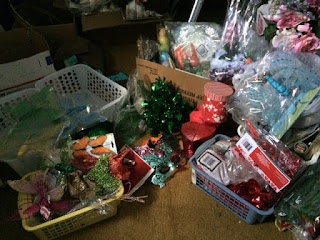 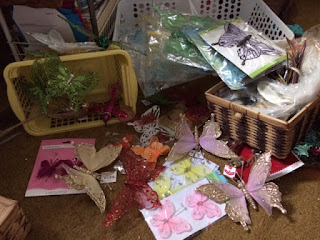 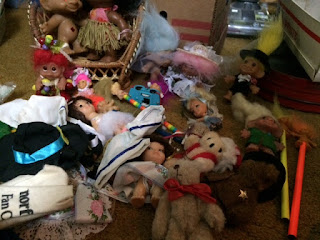 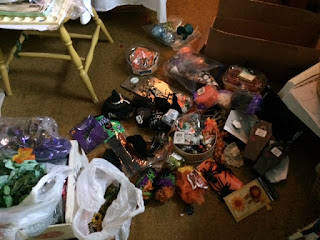 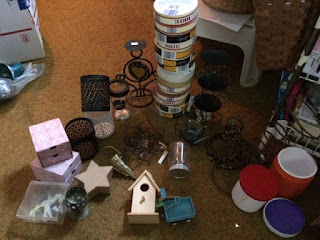 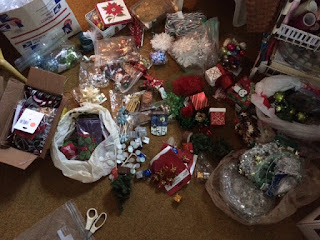 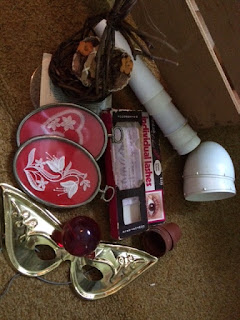 You know you are a craft supply hoarder when you really deep down know that at least 70% of this stuff you'll never use. The dolls were from an article I did ages ago for a magazine no longer in print on dressing tiny dolls and trolls. I still didn't get to the 2 shelves in the top of the closet. There's lots of old clothing patterns, dolls a lady dropped off to be fixed and I never heard from her again, and more stuff I know I don't need. Like bags of bird feathers. 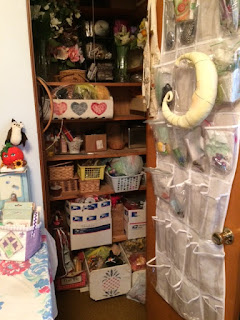 So here it is all tidy with stuff sorted and put in boxes. The flowers are in large vases so that I can see what I have. There's even some empty spaces, well, at least for now. The shoe caddy on the door is holding some things I've been making for a book I've now been working on for 2 years. If I can ever decide on how I want the photos to look like I can get it done.

I'm off to do some cleaning before the DH gets home with the new puppy. I know some stuff will have to out of his reach. So be kind, have compassion, and wear a mask.