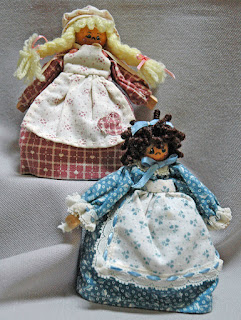 Here's another of my mini clothespin doll patterns. This one is for a topsy turvey doll! The pattern has been updated with new photos and mistakes I found have been fixed. I can't believe I never had the tiny heart in the patterns :( If anyone wants to make her, but doesn't do any wood working, I'll make up a kit like the ones I have at Etsy for the regular dolls.

Two days ago the weather people on TV in Pittsburgh were warning of really bad thunderstorms and even possible tornados but the weather has been good with no rain so here. We could use the rain for the gardens but heavy storms could break the delicate plants. I'm not a fan of summer any more. It just means so much work. Between cutting grass and having gardens at 2 homes I'm always so tired I can't get much sewing done. So here it is the beginning of June and I'm longing for October.

Jingles is loving the weather. A fav spot is on the walls of the basement garden. I call it that because the garden is inside what was the basement of the original house on this property. One side is collapsed and that's the way in. We had to put up a makeshift fence to keep the ducks and chickens out. They ate all the beet seedlings and dug up the lettuce seeds. 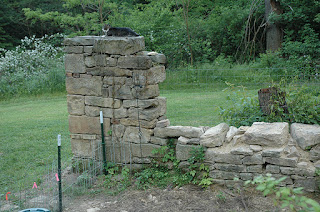 The place were Jingles is in the photo below was a leaning part of the wall. Jack knocked it down because it was dangerous. There's fencing across it, too though you can't see it in the picture. Something else you can't see in the picture are the small snakes that live in the wall. Not a fan, but understand they won't hurt me so I can live with them. Nefertiti is also in the photo. She a silver laced chicken, very pretty but a bit standoffish compared to the rest. 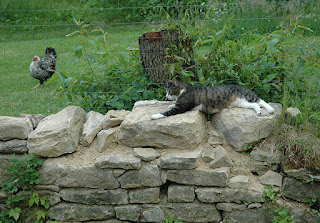 Sadly I have to report that we have lost 2 of the female ducks. Not sure what's taking them but for now the rest are staying in their large pen. Only one female has a name, Bangles because she has 2 bands on her one leg. The rest are too similar to tell who's who. I pray everyday none of the chickens disappear. They all have names and I'd miss them so much. Jack says we need to sell off one of the male ducks now. It will be hard since we've had both for a couple of years. We have Glen, the campbell duck and Blade, the runner. Yes, I named them :)
Posted by BJ at 3:07:00 PM