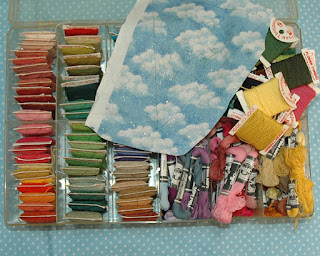 I was wondering how many people who embroider have tried flower thread? I love the stuff but seldom use it when designing. That is until now. I'm working on a series of new designs and the second one will be made using a combo of Ginnie Thompson flower thread (still being sold !) and DMC flower thread (which isn't). I prefer the DMC and I'm lucky to have a small stash as you can see in the pic above. Since using a thread that's hard to come by, though you can still find it on etsy and ebay, I went in search for conversion charts. Both DMC and Ginnie Thompson have them. I like that there are charts to switch from flower to regular floss, too. The Ginnie Thompson site says that 1 strand of flower thread is equal to 2 strands of floss. I think the 1 strand of floss is so much nicer to stitch words with but it's nice to know what to use as a substitution.

The fabric in in pic is what I'm using for the series. I've been collecting fabrics with clouds, stars, and dots for years. Thought it was time to use one from the large stash. This one even has a bit of sparkle to it :) I like doing series when it comes to the embroideries. So right now there are 4 planned with 2 designs in each release.

I was looking thru pics I've edited to post online and realized I never posted the cookie recipe my husband came up with. He loves oatmeal cookies and will spread them with peanut butter so he decided to combine his 2 favroite cookie recipes and came up with the one below. He wrote out the ingredients and I added the rest. 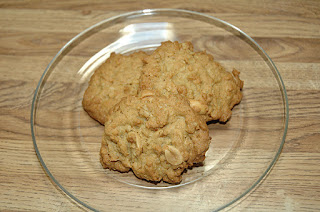 The peanuts I used were the ones in the shell, and yes I'm the one who opened them all. I tried the oringinal oatmeal cookie recipe with all butter but Jack likes it with 1 stick butter and 1 Fleischmans (dairy-free). The only reason for the dairy free is that it's what's in the house since I'm lactose intollerent. 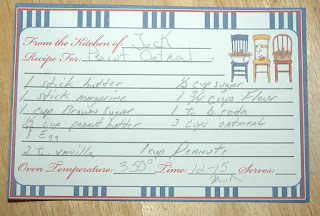 Some more info on what I used. b soda mean baking soda, the peanut butter was Aldi's Peanut Delite Natural creamy (which is why I used 1 cup of nuts), and the oatmeal is the oldfashioned kind not instant. I did use store bought brown sugar for this recipe but I often use white sugar and add molasses to make brown sugar when I bake.

I'm debating whether to make some ravioli today. The heat wave broke and it's a really nice day for gardening. I still need to get the pepper plants and bean seeds in so cooking may have to be something quick instead.

Here's a pic of one of my favorite tiny flowers, forget-me-nots. Sadly they are growing in a grass section of the yard so when that section needs mowed the flowers are gone. They are strong little plants and rebloom again and again. I've thought about moving them but since the chickens dig up everything newly planted I'm leaving them where they are. 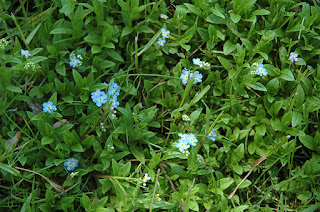 Haley and Dash, 2 of the nine chickens we have. Most of the chickens seem to know their names but Haley comes when you call her. We're worried about them and the ducks since one of the duck girls is missing. Guess she became dinner for something.☹️ 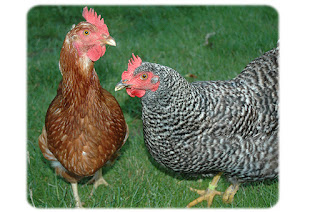