Too busy to think some days, how about you?

How busy are you? Here are some of the craft things I’m doing when I’m not doing the regular house chores, mowing grass, gardening, and helping the husband with whatever he’s working on.

I’m working on some new patterns. One is for a cloth animal that took me forever to find fabric I liked and even now I’m wishing for something else. That means it will get set aside while I move on to the other big project. It’s a new series of tatting patterns like my seasons series.

I was going thru some patterns I designed even before the original ones printed by Handy Hands. I need to see if she is still printing the book. If not it reverts back to me and I can sell it the way it was originally designed. As for this new pattern, I have to remake some of the samples simply because the threads for some are no longer being made. I’ve got 2 more to do, then comes deciding what I’ll put them on. I haven’t tatted in probably over 2 years. I moved on to other hobbies and just lost interest until I came across these old designs. If it didn’t take so long to tat I’d have even more patterns. You know I even designed a bunch of jewelry patterns but never did anything with them because I was afraid someone else may have already designed something similar. That's the problem with tatting.

When I’m not working on those items I’m working on a book with over 20 patterns. I’m not ready to reveal what they will be for since I haven’t decided whether I’ll sell it myself or try to get a contract with a publisher. It’s so hard to give up control and let a publisher take over.

Oh, and I don’t want to forget all the embroidery and quilting I’ve started (and not finished) in various containers in my sewing room. All I seem to finish are the monthly freebies I put here on my blog.

So what’s this all about you ask? I recently added some more hobbies. I took some free weeklong art classes called Kaleidoscope 2021 free taster classes put together by Tamara Laporte. I thought some of them would help me with designing new doll faces and working with colored pencils. I enjoyed the classes so much I went out and bought water colors (which I haven’t used since I was a child) and a large box of sketching supplies. Now I’m looking for more classes. Here’s some pictures of results of 2 of the classes. 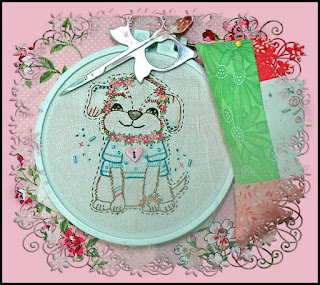 Of course instead of just drawing Tam’s dog and painting it, I turned it into an embroidery, too. I really liked the class of the girl with the bird on her shoulder. Angela Kennedy was the teacher. She has artwork on etsy and I just found here Facebook site called 100 days of hair, and yes I'm going to do them even when I know I'm over stressed with making stuff now. Last year it was Johanna Basford and now it’s learning how to use watercolors after drawing. 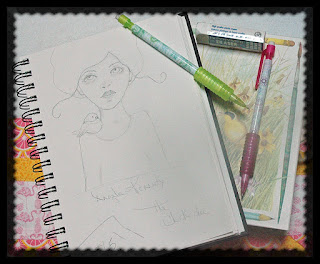 When I started Johanna’s free classes last year I bought a sketch book and some good erasers but after these classes I went out and spent (for me) a lot on art supplies. Now I’m stressing over whether I’ll really use them, should I return them, or should I just keep them. I mean did I have to have the large sketching kit? No, I could have bought a small one for half the price. Will I ever use the all the charcoals in it? I’m beginning to realize that I most likely won’t. It was the little case it all came in that “called” to me. I love those sorts of things. At least I did get the small watercolor case since I knew I may not use it very often.

After reading what I just wrote, it has made me realize the case will be going back and I’ll get the smaller set of just pencils and a new pack of blending  stumps. The art classes are supposed to be a calming fun hobby but if buying supplies I may not use is making me stressed it’s not working. I’m not good with spending large amounts on craft supplies any more. I have SOOOOOOOOOO much I’ve bought and never used.

There’s all the supplies for microscope jewelry that I really wanted to make but it seemed like every time I got them out Mom would call. By the time I got off the phone I lost my muse so I’d put it all away again. Well, I can’t blame Mom anymore since she’s gone, now it’s the husband. I just know if he saw me trying to solder there’d be all kinds of “helpful” hints and he’d take over. Another hobby I used to love was making fur bears using old fur coats and new fake fur. I still have a large box (the kind Chewy deliveries come in) filled with coats, fur, eyes, silk thread for the noses, books, and lots of magazines. I got so tired of the fur sticking to me, the dogs, and getting all over the house I just gave up making bears out of fur. I need to sort everything so I can sell it all on ebay. At least I didn’t go too overboard with scrapbooking supplies. I realized early on it just wasn’t for me. Then there are all the doll size chairs and the pumpkins and the feathers and the fabric. I’m thinking I no longer want to a part of the ‘she who dies with the most craft supplies wins’. What’s the point of having so much stuff that instead of being inspired you feel overwhelmed? Guess that means I’ll be adding to the piles of sell, donate, toss. Now to make the time to take pics for ebay.

BTW, if you going to Tam’s site, willowing.org you’ll see more classes for Kaleidoscope 2021. It will be in August. Of course these you have to pay for. Tam does beautiful fantasy style artwork. Her drawings make me want to make them in cloth, not just draw them.

The next embroidery will be up soon :)