Finally after 4, no 5 years the new seahorse rider is done! 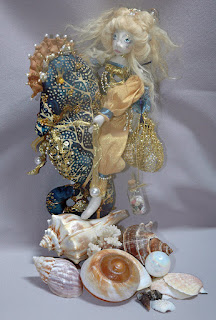 Here they are, Kailani and her seahorse Seafoam! The pattern is not for the beginner doll maker, but by leaving out the wiring on Seafoam and doing as easier hairstyle on Kailani, the beginner who has made some dolls will be able to make a simpler version.

I had soooo many ideas for this pattern that I kept setting her aside. I decided that this past winter was going to be the time I finally finished her. She is an updated version of my old seahorse riders pattern.

I have Seafoam tucked in some seashells and that's how I plan to display them but just like the original pattern you can add thread or fishing line to the top of the seahorse and hang them.

Here's another pic so you can see the fin Kailani is sitting on and the ruffled bustle over her pants. Her hair is Tibetan lamb wool. I bought the skin at Ebay and cut the wool from it to attach to Kailani's head. 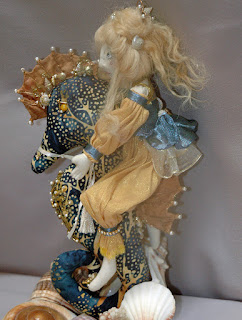 Seafoam's fins are wired with fun wire and pearls. I decorated both Kailani and Seafoam with seashells, beads, pearls, sequins, and glitter. 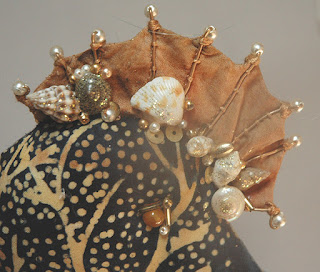 Now about Kailani's name. It is a girls' name and is pronounced kye-LAH-nee. It is of Hawaiian origin, and the meaning of Kailani is "sea and sky". As a sea nymph she can breath under water and in the air. 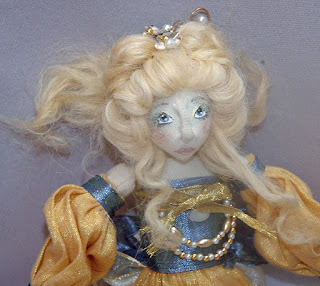 Look for them to be put up at my Etsy store later this week.