It's not the first time or even the 10th,

I'm so tired of being clumsy. I spent my childhood covered in band-aids from my elbows to my knees. I was always running, tripping, and falling. I've knocked out teeth (baby ones), had stitches, and ended up on crutches twice.

By my teens I was a little more careful but I do remember falling off a fav pair of sandals more than once. I bet most people would have stopped wearing them but I thought they were fantastic so I kept at it. Anyone remember the wood soled Dr. Scholl sandals? I didn’t just slip my foot out of them, my heel would go to the side and the next thing I’d have an ankle sprain. I had 2 pair and I still have them. I get them out walk around the house till I remember how bad it felt and put them back in their boxes (original, BTW).

When platforms became fashion fun I owned 8 pair of various heights. The platforms ranged from one inch to 4 inch. As a girl just over 5 feet I loved these shoes. I still have 3 pair of them. I’ll never wear them again but I do love looking at them. They let me remember how it felt to be taller. The ones with the 4” front platform have a 7 inch wedge, all in denim. You may think these were just a disaster waiting to happen but they taught me to slow down, to be more careful after falling over a few times.

I now only wear flats or shoes with a heel/wedge height of no more than 2 ½”. I have happier feet and less ankle sprains, at least until the past 4 years. I’ve lost track of how many times I slipped and fell in the snow because I went out in slipper boots instead of regular snow boots (stupid I know). It took lying on my back by the mailbox, embarrassed beyond belief, to make me change shoes. Things were going better till I fell down some steps 2 summers ago. I didn’t go to the hospital but should have. I had a spiral fraction from slipping off a curb in town over 10 years ago so I knew there was a good chance this had happened again. I knew how to wrap it, had crutches and a brace so I treated it myself. Once it healed it seemed I kept reinjuring it over and over for the next year with minor sprains. Then it happened again, not as bad, with the other ankle. Now both ankles have become susceptible to sprains. The littlest twist makes them hurt.

This all leads up to this past Wed, I was in sneakers mowing the grass when I stepped on a large black walnut. My ankle went sideways and I was down. Jack was just pulling in the drive so he saw me fall. So here’s a pic of my ankle all wrapped and on a cushion. At least I can walk. I don’t need crutches, but I won’t be doing much other than sitting. Now’s the time to catch up on old magazines and sewing. I have a lot of pictures to post but I’m tired so I’m going to close.

Stay safe, be kind, and wear a mask! 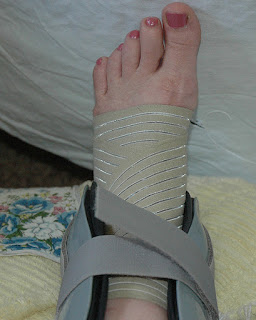 I'm so glad I had just polished my toenails :)