If you are an unlucky person you gotta see this movie-- 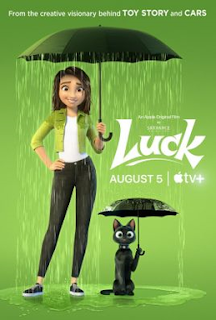 I'm an unlucky person. I'm the one you see stepping on a snow pile only to find there's an ice cold puddle under the snow. I'm the one whose paper checks stick in the reader machines. I'm the one who locked herself out of a car and the house multiple times. There's a lot more but why depress you. So the reason for all this is the movie in the pic above. It's on apple+, which I got for free for 4 months since I bought a new iphone. Had to since I was using my brother's hand me down and it was becoming obsolete. I've come to terms with having bad luck so when I saw this movie being advertised I knew I had to watch it. I loved it so much I'll be watching it again.

The latest bit of bad luck is all the poison ivy I've got. It's so bad I was ready to go to the dr. but then I remembered at the moment I don't really have a dr. I keep forgetting to find one. So instead I used LOTS of lotions to dry it out and stop the itch. From my toes to one side of my neck there are patches. Some are scratched up bad because I'm scratching them in my sleep. First it was my neck, then my legs, and now I'm trying not to scratch up my arms. Where did all this come from? The dogs and cats.  I'm no longer holding or hugging them, and I yell at them a lot to stay away from my legs. If it wasn't so warm I'd be in long pants. Because I even have some on both hands I wear gloves when I fix food or need to carry the kitten. The ivy is growing everywhere in the woods so the furry kids run thru it and brush it on me. The DH has a small patch on one arms and after seeing how bad I have it he's now being careful, too. Oh well, I'm off to put another coat of calamine on. Did you know it comes in clear, not just the pink stuff?