Got a Book Deal! 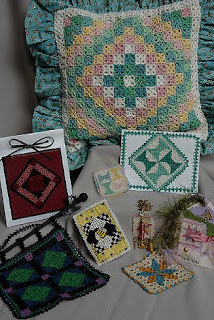 Last week I got a phone call from Barb at Handy Hands Tatting. She said there was a lot of buzz about my patterns and she'd like to turn them into books! We're starting with Old Fashioned Tatting Patterns. You can see the original cover pic above. For the book we'll be making new samples in Lizbeth threads instead of the DMC I used. A few other things will be changed, too. You won't be able to buy this pattern from me anymore but you can get the fall one for a short time. I'm holding off on the winter pattern until Barb decides on whether she wants it or one of the other ones I've been working on. She's also talking about doing Fall tatting into a book, too! When the contract is signed, I'll have to stop selling it.

For now there won't be any new 4 seasons patterns until I hear from Barb if that's what she wants for the third pattern. She may want another old fashioned pattern instead. I'll keep you updated!
Posted by BJ at 3:13:00 PM