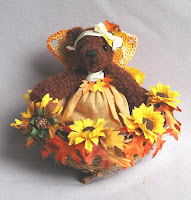 None of them are up on ebay yet. Just thought I'd wait until next month. I also have 2 crocheted mermaids and will soon be done with a cat angel and a tree lady! The cat was supposed to be done for my HA31 ebay group it was based on a poem about a cat that barely hangs on to her witch's broom that a fellow member wrote. My version is the cat who lost hold and is now an angel. I really like her and might have to live with her a while before I put her up for sale. Because I hurt my back I didn't get it finished in time. Same with the tree. She was supposed to be done for SEHA at ebay last week but I'm just finishing the fabric for the bark. I still want to couch more fibers to it. This tree will have a "people"face, arm branches that end in fingers, leaves for her hair, and other embellishments. I saw a picture of one done in Soft Dolls and Animals magazine a few years ago and knew I wanted to do my version. When I get them done, I'll post pictures!
Posted by BJ at 4:13:00 PM